The Evolution of Shared Concepts in Changing Populations 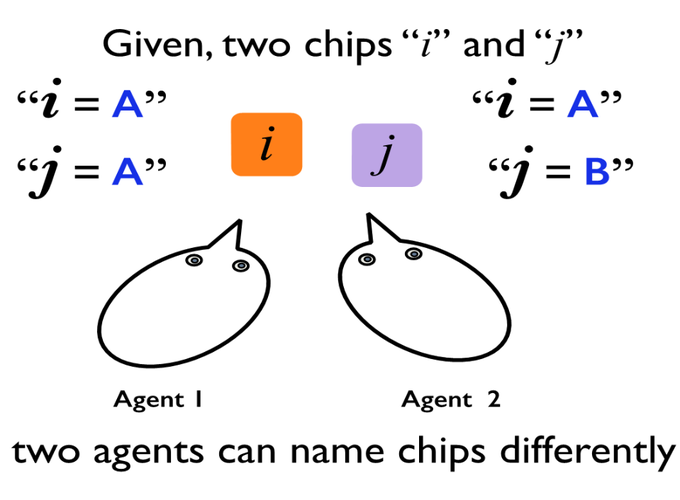 The Evolution of Shared Concepts in Changing Populations

The evolution of color categorization systems is investigated by simulating categorization games played by a population of artificial agents. The constraints placed on individual agent’s perception and cognition are minimal and involve limited color discriminability and learning through reinforcement. The main dynamic mechanism for population evolution is pragmatic in nature: There is a pragmatic need for communication between agents, and if the results of such communications have positive consequences in their shared world then the agents involved are positively rewarded, whereas if the results have negative consequences, then involved agents are punished. A mechanism for changing the composition of the population due to agents’ birth and death is also investigated. This birth-death mechanism is found to effectively move an established population color naming system toward a theoretically more optimal one. The simulation results of this article provide insights regarding mechanisms that may constrain universal tendencies in human color categorization systems observed in the linguistic and anthropological literatures.

Since January 2015 until I finished my undergraduate degree, I was working on the existing model of the color categorization among a population of artificial reinforcement-learners. The above diagram describes the games they play in order to optimally partition the color hue. The agent’s knowledge is reinforced if they name “similar enough” chips the same way, and penalized otherwise.

My objective was to verify that the populations succeed in categorizing colors under a minimum set of constraints. The given model was unsuccessful and often failed to reach optimal categorization as I increased the number of colors to categorize, as shown in the following video.

I solved the scalability problem by adding one more constraint, birth-death dynamics. It made the categorization solutions more consistent and optimal under parameters with which it is impossible for static populations to do so. In doing so, I created a new data visualization method which enabled observing evolution of color categories. The new method makes it easy to track the trend of each color category in populations, and also eliminates the problem of ambiguity which can arise in line graph. Video example of birth-death dynamics improving solution of static population is as follows:

The following is the video of my talk at Multidisciplinary Design Project Symposium.